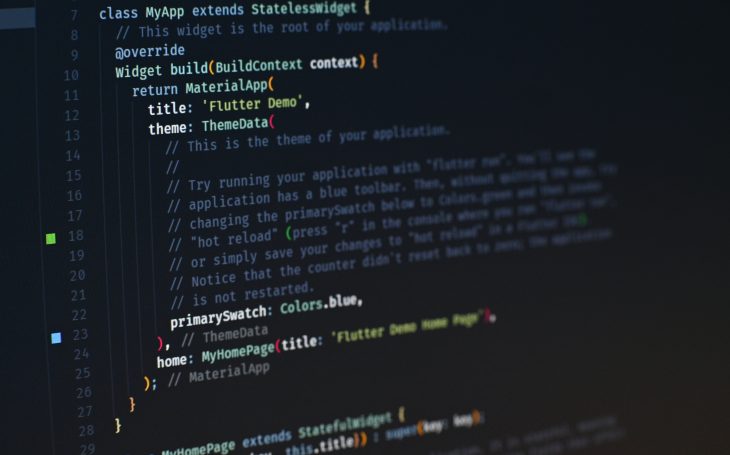 For my next journey, i decided to give it a go with Flutter. Yes i know Flutter has Flutter for Web, why bother using AngularDart? Well, at present Flutter for Web is still in developer preview, and not recommended by Google to use in production. The future is unknown, and we live in the present. So, let’s try using what is available today 😁

If you want to read and do the code at the same time, this article will take about 30 minutes to 1 hour to finish.

I won’t go into detail explaining about Flutter’s Widget, AngularDart and how reactive programming works, as you easily find all the documentations from Google.

In this tutorial, at least you have:

Our goal is to create shareable business logic written in pure dart for Flutter and AngularDart. Our app will make connection to OMDb, get the movie list and show the result in Flutter and Web.

This is our final result.

This tutorial will use MVVM pattern with input output approach inspired by kickstarters, (https://github.com/kickstarter/native-docs/blob/master/inputs-outputs.md).

Here’s a design diagram how our app structure will be.

For this tutorial, i’m not using clean architecture approach as it will make the tutorial more complicated than it should be.

At the time of writing, i am using the latest version of the following libraries:

Now that we have Flutter application, we’re going to create the library, select File -> New -> New Flutter Project and select Flutter Package. This will be our Pure Dart implementation.

Below is our project directory structure:

We will connect to OMDb and get the movie list. API is free, you can get it from here:

We are going to search all movies contain avenger keyword with this url: http://www.omdbapi.com/?s=avenger&apikey=xxxxxx

Below are the JSON responses from the API:

Its recommended to use lowercase and _ when creating Dart file.

Next step, we will get movie list from API using http library. Open up core’s pubspec.yaml, add http as dependencies and remove all flutter dependencies (IMPORTANT).

If you got an error when importing http or other libraries in core’s module, try go to core’s directory and run flutter pub get via terminal manually.

Now that we’ve finished preparing http service, we’re going to write ViewModel class. This class purpose will be the main gateway to stream data between UI and Service back and forth.

Now lets move to our UI, open up main.dart, and remove the default example code, replace with below code:

Run your Flutter App and you should see the similar output from our Goal Section.

Do not forget to call dispose() during onDestroy() to prevent memory leak!

copy to flutter_shareable project and rename it to angular

Open up VS Code, and select angular directory (do not select flutter project), openpubspec.yaml, addcore library, and update all dependencies to the latest version.

Next, we will provide our ViewModel via Angular’s dependency injection. Create a new directory called src and di as subdirectory, add new file called movie_module.dart

AngularDart provide AsyncPipe to work on Observable. However during testing, using AsyncPipe caused my html page to run in infinite loop. After doing some research (with google of course), i’ve found out this article explaining why it happens. This article is in Japanese, however you can use google translate like i did 😁

Thats why i decided to not use AsyncPipe and listen to Observable manually.

This is not my expertise as i haven’t touched both for a very long time, however to complete this tutorial lets continue.

And create app_component.html in the same directory.

Run using webdev serve, and you should see the layout as displayed in our Goal section.

If you’re getting build error after updating dependencies, simply close the webdev, run webdev build and then re-run webdev serve.

Code sharing between platform is the future. If you follow my Kotlin Multiplatform tutorial you should see the same exact business logic in ViewModel using Reactive approach, i believed somewhere in the near future, we could make this perfect and become benefit for everybody.

This tutorial may become obsolete when Flutter for Web is ready for production use, but until then, i hope this will help you to achieve single code base, multi platform.

Least but not last, code is available here: